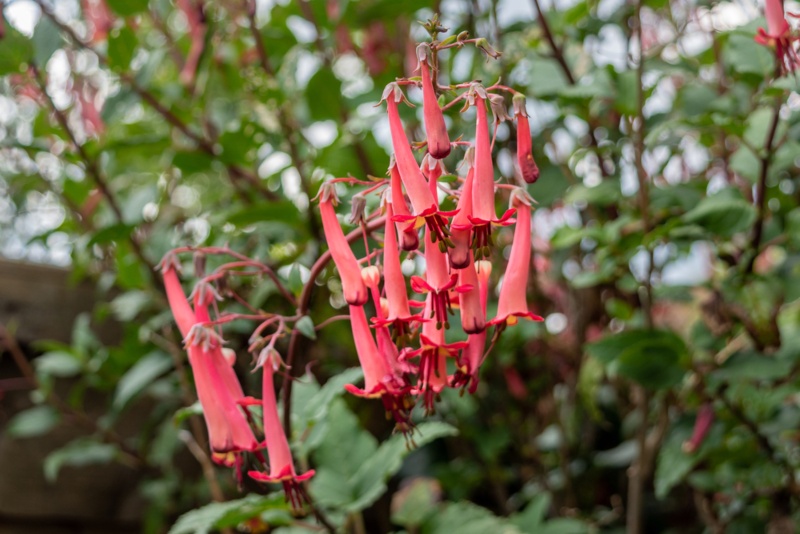 Cape Fuchsiën (or Cape Fur) is a small shrub or small tree native to South Africa. It grows up to 30 feet tall and wide with a trunk diameter of 6 inches. Its leaves are alternate, elliptic and lanceolate; they have 5 petals each, 4 on the upper surface and 2 on the lower surface. They are opposite, nearly equal in size, but slightly smaller than those of the base leaf. The fruit is a seed pod, which contains two seeds. Cape fur has no known natural enemies and does not require any special care. However, it will grow well in poor soil conditions and requires regular watering.

The species is classified as a deciduous shrub, though its flowers do not mature until springtime. The fruits are edible when ripe.

The plant is often grown for its foliage and flower parts, especially for their beautiful purple-red berries.

It was once common throughout much of southern Africa before European settlement and cultivation began in earnest during the 19th century. With its hardy nature and attractive appearance it was soon planted in towns and villages throughout the region.

The plant is now classified as an invasive weed, and it is actively managed by state and local governments.

In addition to its decorative uses, it is also grown for food in some parts of Africa. The root and the seed are edible, though only after they have been sun-dried for 2 weeks and then cooked for 1 hour.

A good way to distinguish between the various species from the cyperus genus is to look at the nodes. The nodes are the little bumps that sprout on the stem.

If you count 8 or more of these on a single stem then you are most likely looking at cyperus longus , otherwise known as kyllinga.

Cape Fuchsiën is a beautiful evergreen plant which can be grown in full sun or partial shade. It is a great accent plant to any garden, especially if it’s massed in a group.

It can also be grown along the edges of a parking lot or driveway where it can act as an effective border plant.

It requires slightly acidic soil with a pH between 5.5 and 7 so add ground oyster shells or crushed chalk to the soil before planting.

Cape fuchsia grows best in moist but well-drained soil. It will not tolerate standing water at the roots. It dislikes alkaline soils and cannot tolerate salty winds, so it should not be planted in windy locations. It is very drought tolerant once it is established.

Cape fuchsia is a shallow-rooted plant and grows best if watered at the root zone rather than by inundating the foliage or dumping water on the leaves. It prefers infrequent deep watering to daily misting.

Cape fuchsia is usually cut back hard each winter to a woody stump. This is necessary for the plant to fit into small spaces and to maintain its bushy shape.

It will bloom best if it receives some pruning during the growing season as well. It is an evergreen plant and will retain its foliage throughout the year in most climates. It does not tolerate temperatures below 15 degrees F.

Cape fuchsia prefers a loose well-drained alkaline soil, but is very adaptable and can grow in most soils. It grows best in full sun but can grow in partial shade.

It cannot tolerate drought conditions so some irrigation is usually required to keep it healthy and to prevent it from losing its leaves. Cape Fuchsia plants do not tolerate severe pruning and can be grown as a hedge if planted 2 feet apart.